Imbalances, realms of possibily and chances of transformation

In response to the invitation by the Quadriennale, TOMBOYS DON’T CRY has involved ltalian and international artists to build a polyphonic choir of voices united in a journey that explores the idea of the body in its presence, latency or emanation. By considering the internal coexistence of various ‘densities’ and ‘halos’, the traces proposed by the 12 artists introduce spectrums of investigation into a physicality that is at times disjointed and mediated by language, emotions and the desire to describe itself so as to continue to recombine in a perspective of resistance rooted in transfeminist queer intersectional research. The project is to be considered as an organism that defines its somatic features through smell and its emotions through the folds of an elbow, with its breath marked by the research of each author.

– In the blown glass sculpture by Real Madrid, the seal of the project, the eyes get stuck in the tear and reflect on the fragility and stability of emotion.

– With a selection from its own archive, TOMBOYS DON’T CRY opens up a non-linear documentation on the practice of weeping and its physical, cultural and social dynamics, with traces that rework its more or less extreme aspects: from exaggerated euphoria to the darkest of tragedies.

– Deborah Joyce Holman deconstructs and reveals the instrumentalization of bodies and identities also in relation to the ”collective self” (a term coined by Maya Angelou), self-care gestures and the promotion of inner growth.

– Just like the video performance by theorist and activist Ann Cvetkovich in dialogue with director Karin Michalski, whose project constructs an alphabet of words that identify negative feelings, providing a different meaning, understood not as individual faiIure but in such a way that it is perceived as an expression of a ‘public feeling’, politicizing it in the context of neoliberal working conditions, homotransphobia, sexism and racism.

– While the weeping icon by artist Rada Kozelj, inspired by Vinca (a prehistoric people of the Balkan area) sculptures, becomes a symbol to vindicate the struggle of the Bosnian movement Pravda za Davida.

– In Tarek Lakhrissi’s video, aliens invade the earth to subvert capitalism, evoking authors such as Octavia Butler, Assia Djebar, Fatima Mernissi, Gloria Anzaldùa, Donna Haraway and Angela D, with the contribution of Sorour Darabi, a performer who explores the boundary between appearance and artifice, in a body oppressed by confines and the sense of class.

– Mutant creatures bordering on the extraterrestrial are also found in Cinzia Ruggeri’s drawings. The body is transformed. The colors and photochromatic effects of the fabrics shape energetic shapes and vibrant transparencies, interpret and disguise. In the visionary design of clothes as sculptures, limbs become ramps, trampolines, springs and hooks.

– Malelingue is a series of graphic posters created by ldioletta, which refers to a ”communication idiosyncratic to orality and the performative side of literacy (the realization of the text). A way to embody a lineage – both real and putative – of imaginative storytellers”.

– The fetish boots of Eleonora Luccarini, a device accompanied by 13 poems that the artist reads during the opening of FUORI, under the alter-ego Léonard Santé, are also contextualized in this dimension.

– Elena Radice collects, within a publication, the ambiguities of language and virtual space, in the context of a free ‘ask a question’ chat.

– By resetting verbal codes, the edition of palindromic posters introduces the encounter of different ‘consistencies’, together with a collection of unlikely sentimental objects and the ‘multi­handed’ sculpture that, once worn, appears to give the power of foresight for imagining other bodies and other worlds (Dafne Boggeri). 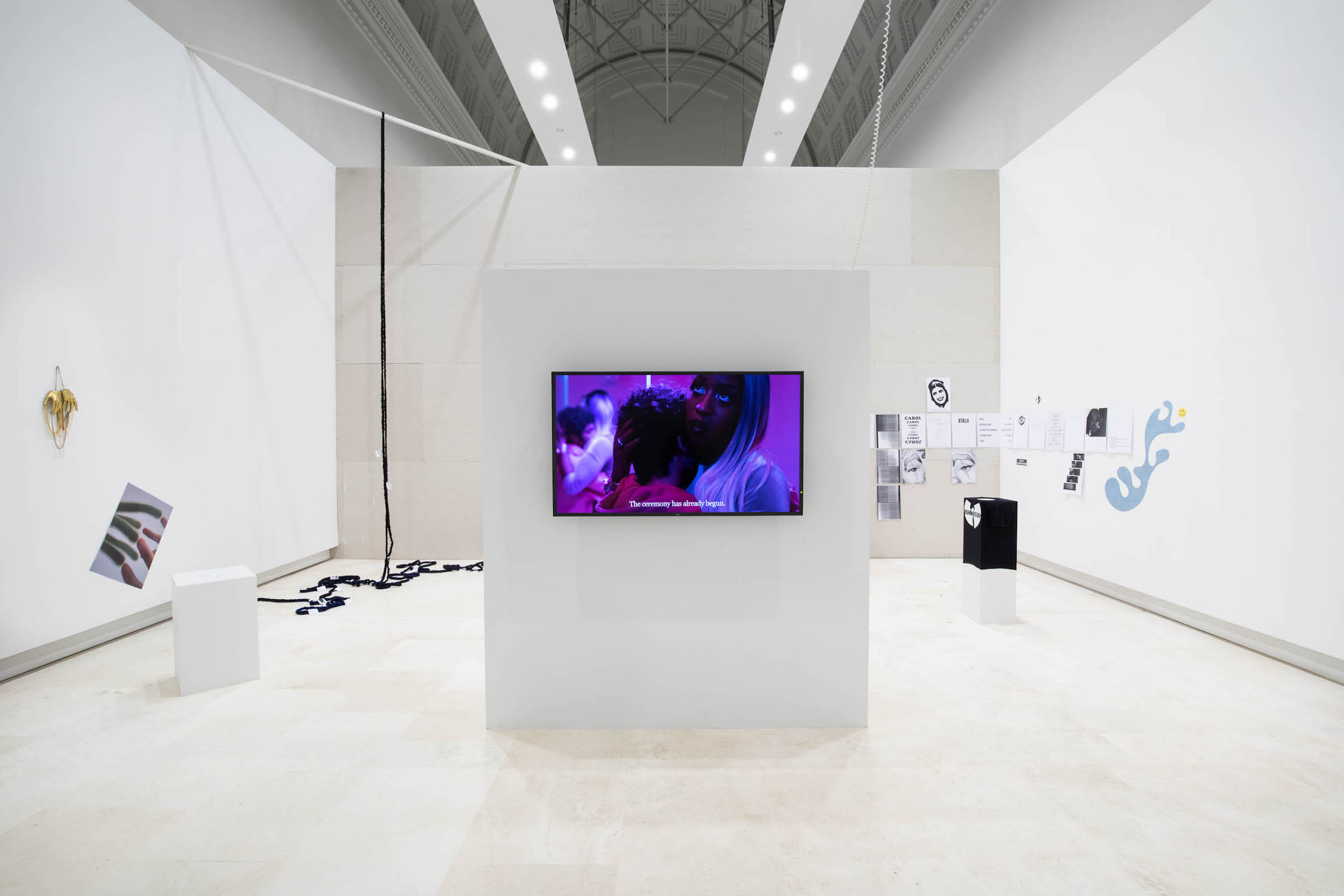 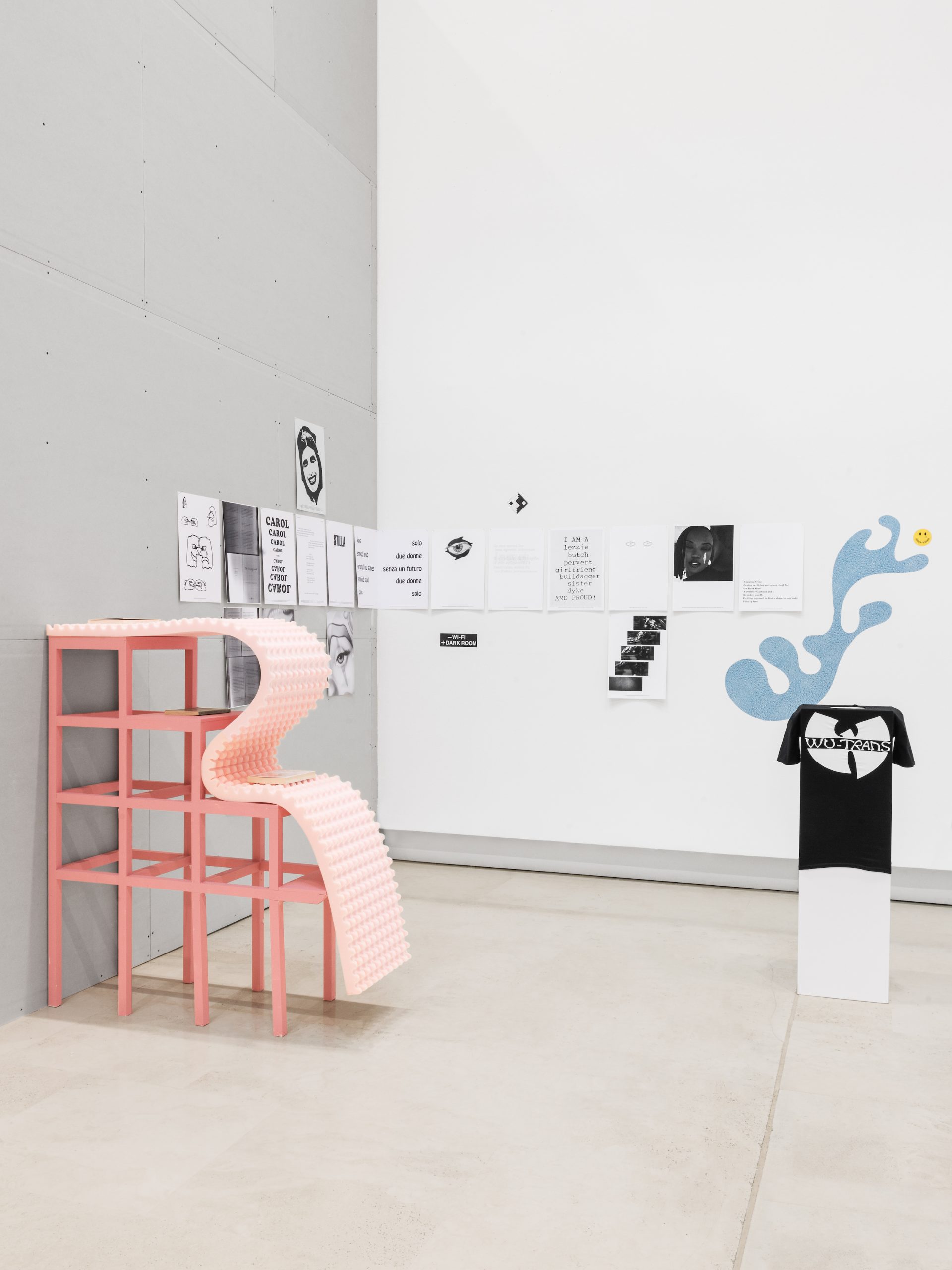